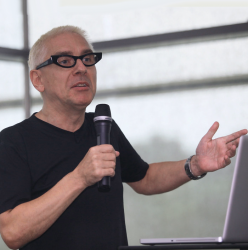 His inter-media performances and artworks are shown at festivals and theaters throughout Europe, Asia, North and South America and Australia. Many of his projects, such as D.A.V.E, Apparition, Le Sacre Du Printemps, Dancing House, and Ego, are considered groundbreaking and genre-defining for the development of new artistic forms of human interaction with digital systems.

Obermaier is visiting professor at the University IUAV of Venice, Italy and at Babeș-Bolyai University in Cluj-Napoca, Romania teaching interactive arts and multimedia performance.

He taught as an adjunct professor for composition at the Webster University Vienna and held courses for choreography and new media at the Accademia Nazionale di Danza di Roma. From 2016 to 2018 he was co-director of the Master for Advanced Interaction at IAAC (institute for advanced architecture of Catalonia) in Barcelona/Spain. He gives lectures at international conferences and institutions.