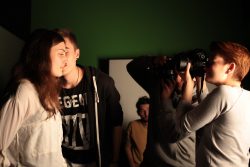 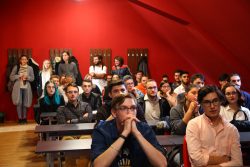 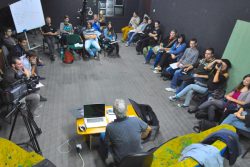 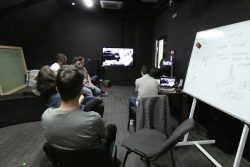 The Cinematography Photography Media section combines theoretical courses with a range of practical workshops, offering students the opportunity for a complex professional qualification in the fields of television production, media production and film production.

After completing a general theoretical and practical training in the first year of study, students have the opportunity to opt for one of four specialization routes. Each of these routes has courses with specific objectives, as well as some joint courses. Acquiring practical, artistic and transversal skills, such as teamwork, is achieved by completing common courses within several specialized subjects, considered as the main objective of the semester. Thus each student, regardless of their chosen specialization, will have the opportunity to work on several media genres, according to the complexity of these genres. The areas of interest of our graduates are:

The Film and TV Directing route of specialization deals with the study of elements of cinematic semantics, theory and practice specific to directing techniques in fiction, documentary and television productions. Skills in the field are acquired both by focusing on the director’s relationship with the actor and the production team and by developing an auteur’s vision of different types of scripts. Acquiring a solid film culture together with the development of creativity and initiative are the main aspects pursued in the training of future directors. In their chosen career path, they will be able to carry out their creative work by leading artistic projects and coordinating production teams.