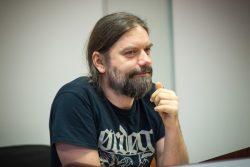 László Csibi studied Film and Media at the Faculty of Theatre and Television at the Babeş-Bolyai University. He is the director and producer of several documentary films (Nussbaum 95736; Sweet Transylvania, Here We Were) and musical videos which were screened and awarded at national and international film festivals. He received his PhD degree from the Babeş-Bolyai University for his thesis called “Count Sámuel Teleki’s Expedition in Africa: The Heritage of Documents and Photographs”. Besides investigating Count Teleki’s expeditions in Africa, László Csibi’s research and publications focus on the history of photography and the contemporary oral history of Transylvania.

He is the founder and head of Kolozsvár Filmmaking Workshops, an organization which helps Cluj-based high–school students to develop their photo and filmmaking skills.

He also works as an associate Assistant Professor at the Faculty of Political, Administrative and Communication Sciences (FSPAC). 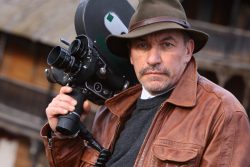 As a cinematographer, director, screenwriter as well as professor of Film Studies, Gábor Xantus holds more than twenty-two national and global film awards. He started his career as the youngest journalist of the Romanian Television and soon embarked on shooting on 16 mm film – something that was a real novelty at the time. After his doctoral studies in Bucharest (which he completed with distinction in Documentary Film Studies), he established the first Hungarian television workshop in Transylvania (1990) and later participated in creating the well-known cultural-religious Filetheos Studio (1997) and the Television of Cluj. Gábor Xantus also contributed to the re-opening of the Cluj Radio by creating the first radio programmes in the Hungarian language. He was one of the first filmmakers to document the 1989 system change in Romania.

He is the founder of the Film, Photography and Media Department of the Sapientia EMTE University where he also lectured between 2002 and 2003.

He is the author and cinematographer of more hundreds of documentary films, including outstanding examples in cultural, historical as well as sociographical subjects. He participated in more than sixteen revelatory documentary expedition projects which explored and filmed several continents and rarely seen territories, including the Antarctica, Africa, Australia, North as well as South America, Cuba, Hawaii, Galapagos, Papua New Guinea, Borneo, Comodo, and the islands of Micronesia and Polynesia.

In his courses at master’s level, he teaches students of the art of recording on celluloid and the 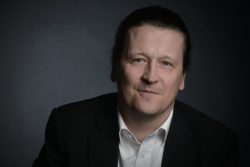 Géza M. Tóth is an Oscar-nominated Hungarian filmmaker and founder and head of KEDD Animation Studio. He is the former rector of the University of Theater and Film Arts in Budapest and currently lectures at UBB. Géza Tóth is also a member of the International Academy of Television Arts and Sciences.

As a filmmaker, he directed several successful short films which participated at more than two hundred prestigious film festivals. These works – inter alia – include Icar (Berlin International Film Festival), as well as Pied Piper (1992) which was selected for the Annecy Film Festival’s Cristal Prize.  His computer-animated short film Maestro (2005) was nominated for the Best animated short film Academy Award. 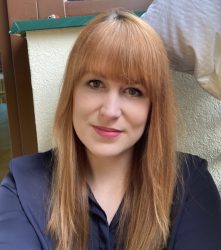 She completed her PhD in Film Studies at the University of Glasgow. Her research focuses on national cinemas, digital media and cognitive and phenomenological film theory.

She is the author of Space in the Romanian New Wave and Contemporary Hungarian Cinema (New York: Palgrave Macmillan, 2018). Anna Batori has published on a great variety of topics, including contemporary German cinema, German-Turkish cinema, Eastern European filmmaking, local and global series and extreme cinema. Her current research focuses on the de-narrativization tendencies and robotization techniques of contemporary Hollywood cinema. 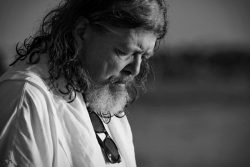 As a Hungarian cinematographer, Gábor Medvigy is well-known for his long-time collaboration with film director Béla Tarr. He graduated from the University of Theatre and Film Arts in Budapest in 1986 and has worked in several feature films throughout the years. He photographed the films of Károly Makk (The Way You Are, 2009), Zoltán Kamondi (Temptations, 2002, Dolina, 2006), Attila Janisch (The Day After, 2004) and Béla Tarr (Satantango, 1994, Werckmeister Harmonies, 1999) and collaborated in several television productions. Medvigy holds several international and national prizes. For his outstanding artistic work, he was awarded the Hungarian Government’s Artist of Merit Award in 2009. 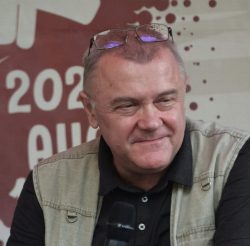 He completed his PhD Degree at the Gheorghe Dima Music Academy with his thesis “The Aesthetics of Mozart’s Dramaturgy. Contemporary Visions”.

His artistic practice focuses on national as well as international theater plays, operas and musicals for children.

His professional experience includes twenty-four years in higher education, thirty-one years in stage directing and thirty-four years in Cultural Management, Organization Management, Cultural Project’s Management and Artistic Entrepreneurship as well as fifty-one in the music industry –  of which he acted twenty-five years as an active musician.

He specialized in Art and Cultural Institutional Management at French and German institutes.

He attended two masterclasses with the American director Andrei Șerban as well as a specialization course with Vincent Liotta at the Indiana University. He also spent one semester at the Theater and Film Academy in Budapest.

He organized annual conferences, festivals, competitions, exhibitions, as well as workshops and masterclasses for students. 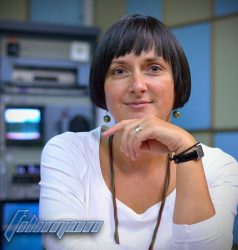 Katalin Orbán specializes in media research, including non-verbal communication in cinematography and television. She is also an active television journalist, a senior staff member, editor and moderator of the Cluj Regional Television Studio at the Romanian Television.

She received her doctoral degree from the Doctoral School of Hungarology at the Babes-Bolyai University. Her awards include the European Parliament Prize for Journalism (national section) for her reportage Gödör (The Pit). She is the author of several documentary films and has been credited in numerous international television productions.

Katalin Orbán is also the production manager and supervisor of Fecni (an online digital magazine), which broadcasts in the Romanian Television’s Hungarian programme. 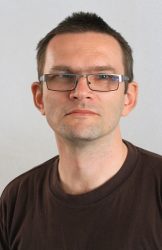 János Tárkányi specializes in motion picture photography and video-journalism. He is also a TV editor and film director.

He holds a doctoral degree from the Babeş-Bolyai University. His thesis dissected science-fiction films from a narrative and visual point of view.

He was one of the founders of the Hungarian Line at the Film Photo and Media Department at UBB as well as the Master’s Degree Programme The Art of Short Film.

He is the editor, cinematographer, co-author or creator of hundreds of television documentaries and reporters broadcasted in the Romanian National Television (TVR) Bucharest and Hungary (MTV, Duna TV)

He is also a member of the Hungarian Society of Cinematographers (HSC) and the director and cinematographer of The Silversmith (2020). 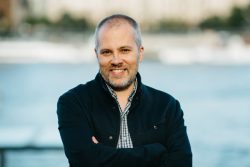 Balázs Zágoni specializes in screenwriting, creative writing and film history. He is also a writer and film director.

He received his Doctor of Liberal Arts Degree from the University of Film and Theatre Budapest with a thesis on the comparative study of contemporary European and Hollywood screenwriting.

He was one of the founders of Filmtett, a Cluj-based film journal/portal and NGO for film culture and education, as well the Filmtett Workshop and the Hungarian Film Festival of Cluj. He wrote and directed several documentaries, including Bishop’s Breakfast (A püspök reggelije, 2018) and Imaginary Revolution (Képzelt Forradalom, 2005). For the latter he was awarded several national and international prizes. He was a member of the Romanian National Film Board (CNC) and participated as a jury member at national and international film festivals.

He has several articles in Film and Television Studies. Balázs Zágoni is also the author of numerous fiction and non-fiction books written for young adults. For The Sphere – Black Light Series 1 (A Gömb –  Fekete Fény 1) he was awarded the Best Young Adult Fiction Book Prize in 2019. 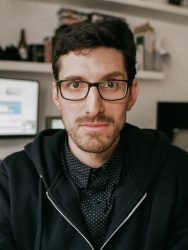 Kalamár Gáspár Gábor specializes in commercial video production. He is the founder and creative director of Gavart Productions Company.

He received his Master’s Degree from the Faculty of European Studies in Cultural and Visual Anthropology at the Babeş-Bolyai University. He completed his Bachelor Degree in Art History. He also studied at the Karl Franzens Universität Graz and the Alpen Adria Universität Klagenfurt in Austria.

After his studies, he worked as a secretary and PR manager at the Scientific Research Department of the Sapientia University, where he coordinated the publishing process of Scientia Publishing House and Acta Universitatis Sapientiae. He was promoted to senior PR manager at the Rector’s Office and organized the work of Faculty PR managers by producing commercial videos for the university. 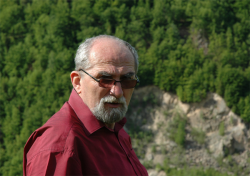 Double specialist in electronics and film sound, Ferenc Koós is an expert in microphone and electronic measure devices as well as sound post-production.

He is the creator of the first Moog-type sound effect in Romania, a device used in more than thirty fiction-length and animated films, including Nemuritorii, Elixirul tinereții, Hyperion, and Comedie Fantastică. Koós participated in more than hundred feature film soundtrack projects and animation films in Romania.

His research focuses on recording techniques in the field of cinematic musical instrument sound. 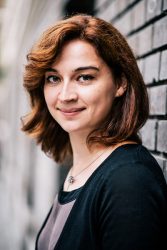 Júlia Anna Makkai is an expert in communication studies and specialized in PR (Public Relations) and branding.

She did research on various topics, including representation analysis and applied communication (PR, branding), as well as television studies, GDPR and digital data protection.

She is an experienced communication specialist in the field of institutional PR, including press relations, event organization and social media management. She also works as an assistant lecturer at the UBB’s Faculty of Political, Administrative and Communication Sciences (FSPAC) and Department of Communication, Public Relations and Advertising. 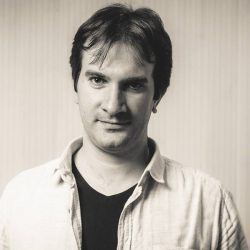 Sándor Miklós specializes in video editing and post production. He is a devoted public media journalist and has been working as a video editor and graphic designer at the Romanian National Television for more than fifteen years.

In 2016, he received the Csép Sándor Award for his activity at the Minorities Section of the Romanian National Television. He is the editor of several award-winning television productions and documentaries.

With an engineering degree in computer science, he has advanced knowledge in post-production digital technologies.

He is also a folk dance instructor, choreographer and cultural project manager. 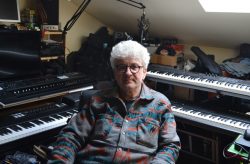 Venczel Peter specialises in Music Composition, Sound Design and Foley. He also works as a stage music director at the Hungarian State Theatre of Cluj. He completed his PhD in the field of  Soundtrack in Film and Theatre.

He composed numerous musicals, rock operas, ballet and theatre pieces as well as movie soundtracks. His name is associated with the famous Transilvanian Rock Opera Mathias Rex. He is also the composer of the well-known family musical Ali Baba and/or The Forty Thieves. For his latest work, The Hunchback of Notre Dame, he was awarded the SCENA Prize from the Gheorghe Dima Music Academy of Cluj-Napoca. 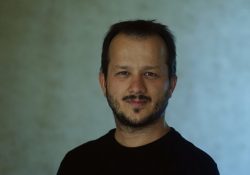 Ábel Visky specializes in film directing. He is about to complete his DLA in  film directing at the University of Theater and Film Arts, Budapest. His research focuses on fictional directing methods in documentary filmmaking. His artistic practice is characterized by the creative combination of documentary and fictional filmmaking methods. His technical expertise include writing, directing, and editing short and feature films, both fiction and documentary. His projects include award-winning short documentaries, short fictions and a feature long creative documentary.